From the RuneScape Wiki, the wiki for all things RuneScape
Jump to: navigation, search
For this item's augmented variant, see Augmented Sunspear (melee).
For other variants of this item, see ranged, magic.
Sunspear (melee)Sunspear (melee, broken)? (edit)? (edit)

The Sunspear (melee) is a level 78 degradable spear made during the quest River of Blood. It acts as a Sunspear against vampyres, as wolfbane against the werewolves in Canifis, and a spear against the Corporeal Beast. At any point it can be switched to a two-handed javelin or magic staff version using the Switch-style right-click option, retaining all current charges.

During River of Blood, it is made by combining a blisterwood shaft, wolfbane, and the broken Sunspear, requiring 75 Fletching. It can only be created once, but can be reclaimed (with full charge) from Ivan Strom for 600,000 coins. It can also be augmented using an augmentor, and retains the ability to switch styles.

Sunspear degrades to a broken state after 15,000 charges of combat. It can be repaired by a Repair NPC for 600,000 coins, or on an armour stand for less.

It is statistically identical to Vesta's spear, though it does not have a special attack.

Completing the quest also unlocks this weapon as a cosmetic override. 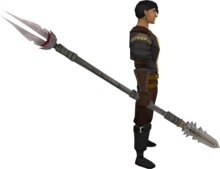 Sunspear, like blisterwood weapons, is fully effective against all vampyres, vyrewatch, and vyrelords/ladies; when fighting them, it has the following benefits:

The base repair cost of the Sunspear (melee) when completely degraded to 0.0% item charge is 600,000 coins. It can be repaired by:

Note: Charms are a secondary reward, obtained with other items