From the RuneScape Wiki, the wiki for all things RuneScape
Jump to: navigation, search
For other variants of this item, see magic, ranged.
Vanquish (melee)? (edit)

Vanquish (melee) is a weapon which can be obtained from May's Quest Caravan by allocating 150 quest points to the combat track. Players can switch to the magic or ranged variant by right-clicking the weapon.

Vanquish increases damage dealt to quest bosses depending on the player's deaths. Per death, it will grant an extra 5% damage when using the weapon, up to a maximum of 25% after five deaths with a quest boss. This helps to finish a quest for players having difficulty with the quest boss. If player is killed by a boss fight mechanism that doesn't register as from the boss (for example, black hand from Pieces of Hate), it does not grant extra damage. It also only registers to one quest boss even if there are multiple bosses in single quest, like Sliske's endgame.

Right-click Inspect: Your Vanquish is attuned to <quest boss>. It is at x/5 of its full strength.

The weapon can be reclaimed for 500,000 coins from May if destroyed or lost in the wilderness; otherwise it is one of the Items Kept on Death. 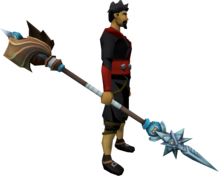