The adamant spear is a two-handed, members only melee weapon. Like all other adamant weapons, it requires 40 Attack to wield. Players who have started learning Barbarian smithing and have level 40 Smithing may produce a spear at a barbarian anvil from one adamant bar and one yew log, receiving 125 Smithing experience.

After completing Tai Bwo Wannai Trio quest, one can obtain these spears from Tamayu's Spear Stall by buying an adamant spear (kp) and using the cleaning cloth on it.

Ironmen looking to find a spear to complete the quest can use any type of spear, they can be purchased at Scavvo's Rune Store or Warriors' Guild Armoury. 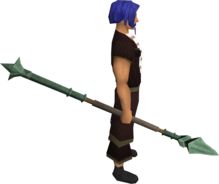