From the RuneScape Wiki, the wiki for all things RuneScape
Jump to navigation Jump to search
For the achievement, see Vindicta & Gorvek (achievement).
Loading...
MonsterNPC
Gorvek? (edit) 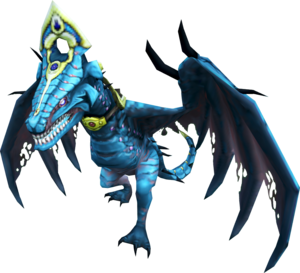 Gorvek is a dragon that featured in Vindicta's memory in Tales of the God Wars. He was responsible for raising Vindicta and is her current mount.

Gorvek supports Vindicta in the first half of her fight by spraying dragonfire in a straight line that deals up to 950 magic damage per tick while players are caught in it. Once Vindicta reaches half health, she will mount Gorvek. Gorvek does not have any actual stats in normal mode, as he only serves as a support unit in the first phase and is mounted by Vindicta during the second when she reaches half health.

In challenge mode, players must fight Gorvek after defeating mounted Vindicta. He carries an additional 300,000 life points and attacks at an extremely fast rate (1.2 ticks per attack). This attack can hit very high even through prayer so defensive abilities are highly recommended to mitigate his damage output. After every 10th melee attack, he will fly back into the middle of the room and launch dragonfire before resuming the fight as normal.

Gorvek is not a wyvern or a drake, even though he only has two hind legs, but he is not quite a dragon either; Gorvek is "an outlier" of a different species, similar to the King Black Dragon.[1]

During the Second Age, at the height of the Empire, Gorvek served in the Tenth Legion. A Zarosian expedition brought back unique fungus after the Kharidian - Zarosian War had ended and grew the fungi to serve as a biological weapon against Zaros' enemies, naming it Croesus. Gorvek watched as Croesus grew eating slaves and being burned of its weaknesses, eventually becoming intelligent and dangerous enough to break out of the city. Despite being ordered to stop, the scientists responsible ignored it and continued to grow Croesus, who broke out a second time. Becoming far more dangerous, the Tenth Legion was recalled to deal with the threat, burning miles of city to stop the spread. Despite their efforts, Croesus proved to be too strong and nearly wiped out the entire legion, forcing Zaros to intervene by burying the infested district beneath the earth. Gorvek was one of the few survivors from the legion.

Gorvek became Morvannon's mount; whether this was during or after Croesus is not known.

When Zaros' Legatus Maximus, Zamorak, wanted to usurp Zaros, he came to the Ilujanka to obtain some of their allegiances. Morvannon agreed to help Zamorak, but Hannibus prevented them from siding with either god, believing that remaining neutral would keep the graces of the winning god. Zamorak began his coup against Zaros, but the Dragon Riders were nowhere to be found. Believing Morvannon to have forsaken her oath, Zamorak ordered his followers to kill her on sight. Morvannon was ripped apart by the Twin Furies' hellhounds; it is not known if she had sent Gorvek away for his own safety or not. Nonetheless, he found Morvannon's mangled corpse and discovered an egg. He decided to take the egg with him and salvaged Morvannon's armour, placing the egg in stasis until he felt it was the right time to hatch. The egg hatched and Gorvek gave it the name Vindicta, teaching her how to fight like a Dragon Rider, avenge the Ilujanka and became her mount.

Gorvek continued to travel with Vindicta in Zaros' service and were led to the Heart of Gielinor, where the two met with Helwyr, Gregorovic and the Twin Furies. Gorvek remained by Vindicta's side and presumably led the troops whenever she was needed elsewhere.

The World Guardian, seeking allies to fight The Ambassador, asked Hannibus for allies, who went with them to his former mount, the King Black Dragon, for dragon activity. The King Black Dragon, having remained in the caves for thousands of years, could not find any, so the World Guardian suggested a visit to Mr. Mordaut. He informed them of a Dragon Rider fighting at the Heart and the two discovered that it was Vindicta he was referring to. Vindicta agreed to join the strike force against the Ambassador's forces alongside Gorvek, who worked with the King Black Dragon to destroy the underwater cannon defences before returning to the Heart to lead their forces.

The forces of the Heart eventually withdrew for various reasons. Gorvek was soon called to Senntisten to help reinforce the eastern front after Croesus was revived by Bik in an attempt to reclaim the stolen eggs. He would be the only remaining defender of this front after Croesus' fungi killed the Lumbridge and Varrock defenders that Seren had positioned there to watch for any signs of enemy attack. Recognising that Croesus could not be stopped by force of arms, Gorvek instead assisted the World Guardian and their allies by guiding them as they worked to neutralise it. Originally Gorvek was at the entrance to the graveyard, but was forced to retreat to the cathedral entrance when Croesus' roots began creeping forwards.