From the RuneScape Wiki, the wiki for all things RuneScape
Jump to navigation Jump to search
The Old School RuneScape Wiki also has an article on: osrsw:Muncher
For the pet, see Muncher (pet).
Muncher? (edit) 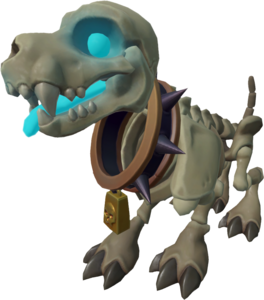 Muncher is Death's faithful pet skeletal hellhound who can be found snoozing inside his master's office, accessed via portal from the Draynor Village lodestone.

In the 2020, 2021, and 2022 Halloween events, Muncher is featured in one of the event's miniquests in which the player helps Death's dogwalker find Muncher in Draynor Manor by collecting chewed bones. The player then uses Muncher's spade to dig up small doggy bones as a treat for Muncher. 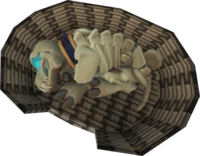 Muncher, snoozing inside his master's office.

In the 2007 Halloween event, it was revealed that Muncher ate the postman and made a complete mess of Death's house, which forced Death to hire the player to clean up the place before his new servant arrived, as he didn't wish to seem completely incapable of looking after himself.

During the event, he could be found sitting next to Death's chair, and could be interacted with in a number of ways, including stroking him, trying to entertain him, and blowing a raspberry at him. If a raspberry was blown at him, he could kill a player instantly, although they would respawn in the mansion with all their items.

During the 2009 event, Muncher could once again be found within Death's mansion, and part of the event involved calming him down so Eek the spider and the player could safely apply spiderwebs to the room he was in. Players could interact with him in the same ways as in 2007, and he was still capable of killing players. 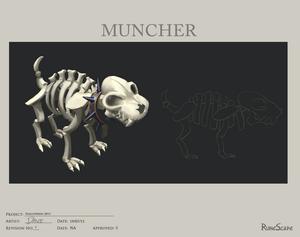 Although Muncher did not directly feature in the 2010 event, he could still be found within Death's mansion, but could not be interacted with.

In 2011, Muncher could be found guarding Death's tent in The Horsemen's Citadel during Deathcon II, and attempted to scare players away from his master. After the event was complete, players could pet him, which made him roll over and bark.

Woof!
Muncher barking and whining at the player.

In 2014, Muncher could be found next to the Burthorpe lodestone barking and whining. By talking to him, players would attempt to understand him, and after Muncher dismissed the notion of Death being stuck down a well, he nodded when the player suggested that Death's house had been taken over by ghosts. Muncher served as a teleport to Death's house, and also offered rewards for the event.

Players could attempt to interpret his barks again, which resulted in the player saying one of a number of phrases, after which Muncher whimpered in confusion. The player then said that they can't understand Muncher after all.