From the RuneScape Wiki, the wiki for all things RuneScape
Jump to: navigation, search
Barbed bow? (edit)

The barbed bow is a vanity item offered as an occasional in-game benefit from RuneScape Game Cards. It has the same stats as a standard Shortbow. When Redeeming either a 90 or 100 days Game card, you also received 200 iron arrows free to use with the bow. It was given out from the 9th of March to the 31st of March 2012 or by purchasing the gold membership package between 20 December 2012 and 31 January 2013. It is also obtainable by redeeming a Premier Club reward token.

It was also made available via:

A cosmetic override version of the bow was available for purchase in Solomon's General Store for 29184 Loyalty Points or with 152 RuneCoins (137 with the 10% member's discount) but was removed and discontinued in January 2015.

The bow can be kept on death if it's one of your protected items, but otherwise does not appear under your gravestone. If lost, it can be retrieved for free from Diango. 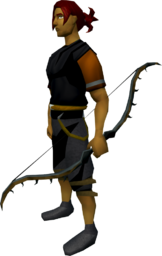