From the RuneScape Wiki, the wiki for all things RuneScape
Jump to: navigation, search
The Old School RuneScape Wiki also has an article on: osrsw:Crystal bow
This article is about the current version of the crystal bow. For the historical version, see Crystal bow (historical).
For other variants of this item, see attuned.
For this item's augmented variant, see augmented crystal bow.
Crystal bow? (edit)

The crystal bow is a degradable bow made from enchanting a crystal weapon seed. It requires the completion of Roving Elves to wield, as well as 50 Agility and 70 Ranged. If you die in the wilderness with the crystal bow you will lose it and it will keep its charges. The attack range of the crystal bow is 7 spaces, the same as any shortbow.

The crystal bow will revert to seed after 50,000 charges of combat, but uses two charges per hit except while within Prifddinas, where it uses one charge per hit. A partially degraded bow can be recharged for a fraction of your current creation cost - if it has 90% charges remaining, and the lowest creation price has been achieved, it would cost 20,000 coins to repair.

Because it is blessed by the elven goddess Seren, the crystal bow does not require any arrows to use, as it generates its own when fired. This lack of an ammunition requirement makes the crystal bow useful for firing at targets that are behind barriers that prevent normal collection of arrows, such as the greater demons in the Ogre Enclave. 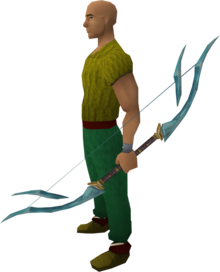 A crystal bow can be obtained by one of four methods:

For the first method, the amount of coins needed to create (and repair) is based on the number of times a crystal weapon/armour seed has been made into an item for coins - the cost is shared over all crystal weapons and shields. The first time costs 1,000,000 coins, and each subsequent creation costs 200,000 less until the fifth time (and every time thereafter), which costs 200,000 coins.