From the RuneScape Wiki, the wiki for all things RuneScape
Jump to: navigation, search
Magic shieldbow (sighted)? (edit)

The shieldbow sight can be bought from the Rewards trader, for 10,000 dungeoneering tokens. According to the 10:1 experience to tokens received ratio, one needs 100,000 Dungeoneering experience to obtain sufficient tokens (approximately level 50 Dungeoneering, assuming no tokens spent or obtained from Sinkholes).

The magic shieldbow (sighted) also has one of the longest attack ranges in the game, able to hit targets up to 9 squares away. 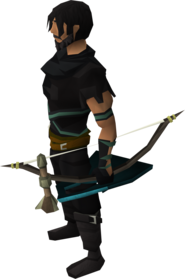