Fate cards were received as a reward for members subscribed from 1 August through to 30 September 2012. It offered four different unique items, that offered some of the largest advantages in the game; however, they were limited and disappeared after the year rolled over to 2013.

Players received the cards upon logging in and a message was displayed saying: "You have received a strange deck of cards that whispers of possibilities." 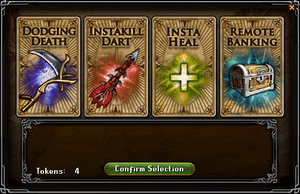 This information has been compiled as part of the update history project. Some updates may not be included - see here for how to help out!
Retrieved from ‘https://runescape.wiki/w/Fate_cards?oldid=35407591’
Categories:
Hidden categories: