From the RuneScape Wiki, the wiki for all things RuneScape
Jump to: navigation, search
Golden katana? (edit)

The golden katana is an item distributed to certain players starting on 22 July 2012.[1] Like the Ornate katana, it had the same stats as a bronze 2h sword, but the attack styles of a longsword. The Golden katana was obtained by purchasing 90 or 180 days of membership from Amazon.com after linking your RuneScape and Amazon accounts. It is now also obtainable by redeeming a Premier Club reward token.

This katana is almost identical in every aspect to a bronze 2h sword, other than appearance and wielding stance. 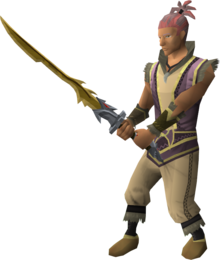 Concept art for the Golden katana found on amazon.com