From the RuneScape Wiki, the wiki for all things RuneScape
Jump to: navigation, search
For this item's augmented variant, see augmented winds of waiko.
Winds of Waiko? (edit)

Winds of Waiko is a Ranged weapon that was originally obtained by completing the "voyage" around the Wushanko Isles seven times in the Beyond the Arc promotion from Treasure Hunter. The weapon can use standard arrows up to dark arrows. This bow cannot be used in Barbarian Firemaking to light a fire, nor can it fire ogre arrows or brutal arrows. 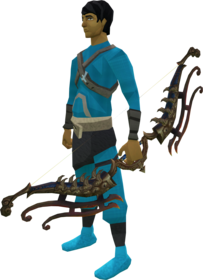