From the RuneScape Wiki, the wiki for all things RuneScape
Jump to navigation Jump to search
"Enlightenment" redirects here. For the light creature's special move, see Light Creature scroll (Enlightenment).
Item JSON: {"edible":"no","id":"31434","stackable":"no","removal_date":"31 May 2016","death":"always","name":"Enlightenment aura","bankable":"yes","gemw":false,"equipable":"no","members":"yes","disassembly":"no","restriction":"limited","release_date":"27 May 2014","release_update_post":"Spend Summer in RuneScape on the Road to Elf City","lendable":"no","destroy":"Your item will be destroyed permanently and it may not be reclaimable.","stacksinbank":"no","removal_update_post":"PvP Duelling Anywhere - Summer HiScores - Summer Sweepstakes","highalch":false,"weight":0.001,"lowalch":false,"tradeable":"no","examine":"Increases all experience gained by 100%. No longer active.","noteable":"no"}

Enlightenment is a legendary aura that boosts all base experience gained while the aura is active by 100%. The aura, along with the crystal amulet, was given to players with 12 consecutive months of membership as of 28 May 2014 and 26 May 2015, Gold Premier club members, and anyone who subscribed using the Summer Special membership promotion in 2014 and 2015.

If lost, it could be reclaimed for free from Xuan, north-west of Varrock Square or in Burthorpe.

Players who did not activate the aura, may still have the original Enlightenment aura in their bank. 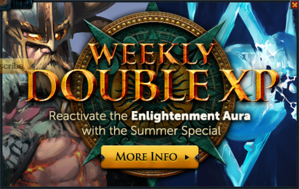 The popup advertising the aura in 2015

Boosts that stack with the aura:

Boosts that do not stack with the aura:

The aura's effect lasts for 1 hour, and it can only be used once a week, resetting at 00:00 UTC on Wednesdays (regardless of logging out). Logging out while the effect is active will not stop its counter. The aura can only be activated during the northern summer months - June, July and August. Vis wax will not reset or extend this aura.

It can be taken into Daemonheim, but the reward tokens will not be doubled, only the experience.