From the RuneScape Wiki, the wiki for all things RuneScape
Jump to: navigation, search
Slayer Tower shortbow? (edit)

The Slayer Tower shortbow was a very rare prize from Treasure Hunter. The bow provides the same bonuses as a regular shortbow, however does not work to light logs for barbarian Firemaking. It was discontinued in March 2015, with 1,500 being available in the rare token store. It could also be obtained as a rare award from any shiny clover necklace variant. 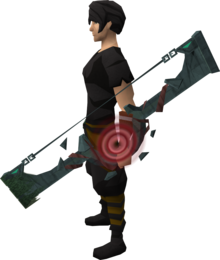 This list was created dynamically. For help, see the FAQ.
To force an update of this list, click here.
For an exhaustive list of all known sources for this item, see here (include RDT).
Retrieved from ‘https://runescape.wiki/w/Slayer_Tower_shortbow?oldid=33936087’
Categories:
Hidden category: