Like all shieldbows and unlike most other weapons, it incorporates a shield inseparably. Therefore, it provides armour and life point bonuses, and counts as a shield for Defence abilities, such as Rejuvenate. The attack range of the maple shieldbow is 8 spaces.

It may be stored in a Medium type Hidey-holes (Treasure Trails) in the Mausoleum off the Morytania coast. 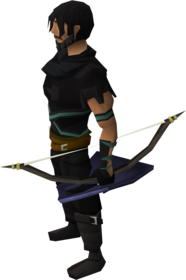 No drop sources found. To force an update, click here.