The magic shieldbow is the second strongest shieldbow that can be fletched. The magic shieldbow requires a Defence level of 50 and Ranged level of 50 or higher to wield. Despite being only a level 50 weapon, even players with higher levels benefit from using this strong weapon due to its properties. It has the same stats and uses as the Magic composite bow, but requires 50 defence.

Like all shieldbows and unlike most other weapons, it incorporates a shield inseparably. Therefore, it provides armour and life point bonuses, and counts as a shield for Defence abilities, such as Rejuvenate. The attack range of the magic shieldbow is 8 spaces.

With level 45 Dungeoneering and 10,000 tokens, a shieldbow sight can be purchased and attached to a magic shieldbow to create a magic shieldbow (sighted), raising its bonuses to those of a level 55 weapon, but it loses the special attack. This also increases the wielding requirements to 55 Ranged and Defence. 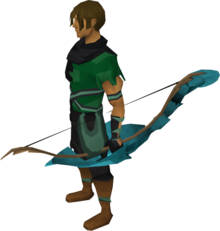