From the RuneScape Wiki, the wiki for all things RuneScape
Jump to: navigation, search
Ornate katana? (edit)

An ornate katana is a vanity item offered as an occasional in-game benefit from RuneScape Game Cards. This item used to be available in the United States, the United Kingdom, and Australia as a bonus for redeeming a membership card during the promotional period. The item would have been automatically placed in the player's bank and if they didn't have enough space, Diango would give it to the player. If it is lost, another may be reclaimed from Diango. The katana can be kept after the subscription has ended, but it is a members-only item.

This is the second item which can only be obtained by paying real world money e.g. dollars and pounds (after the flagstaff of festivities). The ornate katana was available for players in the United Kingdom who purchased a 90-day membership card between 8 July and 31 July 2011. According to the Update FAQ, the katana will also be used for other promotions, and was able to be obtained a second time by purchasing a 30 day subscription through Game's GAMEwallet scheme. It was also available for a third time after buying and redeeming either the premium or deluxe packs from MCM Expo London 2012 (26-28 October 2012). The ornate katana became available a fourth time by purchasing the gold membership package between 20 December 2012 and 31 January 2013. After that date it later became available to anyone who redeemed a Premier Club reward token.

The ornate katana was identical in every aspect to a bronze 2h sword, other than appearance and wielding stance. Currently, however, this, and many other vanity items like it, have had their stats reduced to almost nothing. 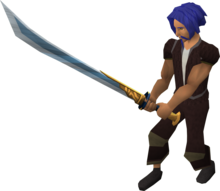