From the RuneScape Wiki, the wiki for all things RuneScape
Jump to: navigation, search
Guthix bow? (edit)

The Guthix bow is a shieldbow aligned with Guthix, requiring a Ranged level of 55 to wield. It can be obtained as a reward from completing an elite Treasure Trail, or as reward from the Giant Oyster. This bow doubles the chance of Guthix arrows dealing bonus damage (from 10% to 20%).

It can be stored in a treasure chest of a player-owned house where it is classified as a level 4 item. 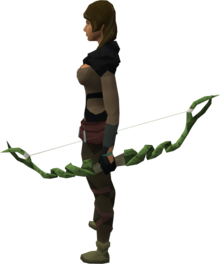 The Guthix bow has a special attack called Balanced Shot, which uses 55% adrenaline. It deals 150% weapon damage and heals the user the amount of damage dealt over time. When Guthix arrows are equipped, there's a chance to deal an extra 100% weapon damage (Earth spell damage), which also adds to the healing effect. The healing effect lasts for a minute and heals 10% of the damage dealt every 6 seconds.

If the special is used again within 60 seconds, the effects timer resets, but not the hp healed, the amount of hp healed will continue to go up until it hardcaps at 400 hp healed every 6 seconds for a total of 4000 hp healed in 1 minute.