From the RuneScape Wiki, the wiki for all things RuneScape
Jump to navigation Jump to search
"Instinct" redirects here. For the Defence ability received after The World Wakes, see Natural Instinct.
Item JSON: {"edible":"no","disassembly":"no","stackable":"no","stacksinbank":"no","death":"always","name":"Dwarven instinct aura","bankable":"yes","gemw":false,"equipable":"yes","members":"yes","id":"33646","release_date":"1 December 2014","restriction":"limited","release_update_post":"Premier Club - Now Available","lendable":"no","destroy":"Are you sure you want to destroy this item? You can get a replacement from the Loyalty Shop.","highalch":false,"weight":0.001,"lowalch":false,"tradeable":"no","examine":"Find magical chests of loot while skilling and killing monsters.","noteable":"no"} 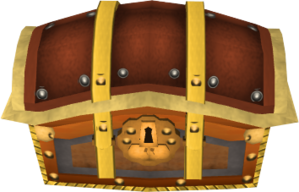 A magical chest appears nearby!

The dwarven instinct aura is a tier 5 aura given out to all Premier Club 2015 members. When worn and activated, it allows the wearer to find magical chests of loot while training skills and killing monsters. It lasts for 1 hour with a usage limit of once per day (resetting at 00:00 UTC every day). It cannot be reset or extended with vis wax; however the hellion aura or the premier artefact can be used to reset it. After activating the aura, a magical chest spawns immediately if doing an appropriate activity (see Triggers below). There is a minimum time of 9 minutes between chest spawns. Up to 7 chests can be looted per use. Ironman accounts receive significantly reduced rewards from the chest; it rewards them at 3/4 of the tier they belong to if they were regular accounts, meaning tier 6 is the highest reward tier an Ironman can receive a reward from. This aura can be claimed as a reward from Egil for 100% respect per half.

A chatbox message notifies the player when one appears: A magical chest appears nearby! If inventory space is unavailable, loot appears on the ground rather than in the player's bank. The crystal key, triskelion, and clue rewards are secondary rewards and appear alongside another item from the reward tables. It is possible to receive more than one secondary reward at a time.

The Dwarven instinct aura is triggered only while doing certain skilling activities. The player should therefore be careful as to how they plan their activities so that they get the best out of the aura.

Below is a table listing by skills and activities that trigger a treasure chest while the aura is active. In addition to these, the Dwarven instinct aura also works with most skilling plots at a clan citadel.

The rarity of rewards varies by total skill level.