From the RuneScape Wiki, the wiki for all things RuneScape
(Redirected from Membership)
Jump to navigation Jump to search 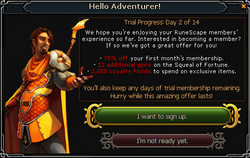 A subscription offer for free players

Membership subscription is the process of a RuneScape player paying the fee to become a member and access the pay-to-play version of the game. When players subscribe, they receive members credit that allows them to access the pay-to-play version of RuneScape. Subscriptions through different payment methods may have varying lengths, although there is a minimum length of fourteen days.

Lifetime subscription was once awarded to a player for revealing the mechanism behind the Partyhat duplication glitch, while most who abused it were then permanently banned afterwards.[1] Since then, lifetime subscriptions can often be won as part of a competition.

First introduced in December 2012 as "Premier Club", it originally came in three tiers: Bronze, Silver and Gold, offering three, six and twelve months of membership respectively. On 4 May 2022, the standard yearly membership option was turned into "Premier Membership", making it available year-round.

Premier Membership may also be purchased with twenty bonds on the Marketplace.

Players who have linked their RuneScape account with their Prime Gaming account are given access to membership benefits and in-game rewards on a monthly basis. Rewards from Prime Gaming often include 1 free week of membership, and on several occasions, 1 free month of membership. Players can only claim this once for each RuneScape account, although if they have multiple Amazon Prime subscriptions, they can link those subscriptions to another account.

Starting 5 July 2010, free players that had never been members before could take advantage of a special promotion whereby they could get up to 7 days of membership at no cost. Players were required to use a credit card to sign up. Any players who did not cancel their membership within the 7 days was considered to have automatically subscribed for one month of membership and the deposited money was used towards the membership fee. The promotion was removed as it was exploited by players engaging in real-world trading. 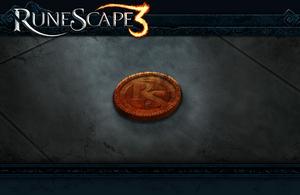 Penny membership was a partnership promotion that ran in late 2013 and early 2014 wherein players were offered 1 month of membership for 1 penny ($0.01, £0.01, etc) if the membership was purchased with a PayPal account. The offer had a limited number of users and was on a first come, first served basis. It was limited to one month of penny membership per account.

Summer Special was an annual promotion that ran from 2014 to 2019 that offered discounted membership during the summer months, typically 3 months for the price of 2. Players could also use bonds to redeem the promotion. 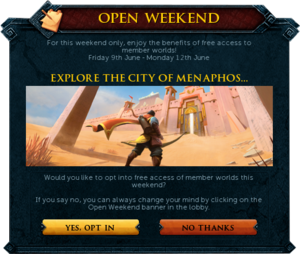 Opt-in interface for the open weekend

From 9 June 2017 until 12 June 2017, free-to-play players were temporarily allowed to access members' worlds and content.[2] It was announced on the same day Menaphos was released, and was a promotion that was designed to encourage players to explore the city.

If the offer was turned down, then later accepted, it did not work.

In August 2021, Premier Club 2021 Gold went on sale as part of the Summer Sale. Summer Premier Club subscribers who decided to purchase Premier Club 2022 had their daily, weekly and monthly perks stacked and membership months extended by a further 12 months.[3]

AP refers to average price per month. These are the prices as they are currently, not the prices for players who have grandfathered rates.

Players can subscribe for membership by clicking the 'Start a new subscription' option in the 'Membership' section of the sidebar on the RuneScape website. The site will then attempt to automatically detect the player's home country. If it can't detect the country of a player, it will bring them to a page where they will be prompted to select their home country. After a country has been determined, a page listing a variety of payment methods available in that country will be displayed. Players can then select a payment method of their choice from those displayed, and will be prompted for information (different depending on selected payment method) in the following pages during the secure payment process.

Subscriptions can be cancelled by selecting the 'Cancel an existing subscription' option in the 'Membership' section of the sidebar on the RuneScape website. Players will be offered various cancellation options:

When a subscription is cancelled, players will continue to have access to members only worlds and features until their member credit expires. When a player's membership expires, they will be teleported to Lumbridge if in a members area upon logout, to prevent them being stuck in a members-only area. In other words, players will not be kicked out immediately. Players that have cancelled their account will be subject to the limits of Free-to-Play players, including a restricted bank allotment of 103 items for F2P accessible items. If you have more than 103 items, not including Members Objects in your bank, you cannot put any more items into the bank until you have reduced your bank size. If you have one kind of item already in bank, you will also be able to deposit more of it (example: more maple longbows can be deposited into bank as long as one bow is already in bank, regardless of bank space) It is advisable to use withdraw all-but-one order to access bank safely. You can now sell members items and objects on a Free-to-play world. This does not include Barrows equipment (You can only sell Barrows equipment if it has degraded completely)

Note: It was once possible to cast High Level Alchemy on members' items, such as yew longbows. However, Jagex changed this after players would 'stock up' on nature runes and yew longbows and spend weeks/months training their magic, meaning that Jagex lost membership revenue.

However, none of the membership functions on the RuneScape website, such as the adventurer's log, worked after the credit expired.

Several payment methods are not ongoing, and need to be extended in order for payment to be continued. In order to prevent member credit from expiring, players must extend subscription. RuneScape subscriptions may be extended by clicking on the 'Extend an existing subscription' option in the 'Membership' section of the sidebar on the RuneScape website. This will bring players to either the normal page displaying payment methods for their detected country or the country select page if the country is undetectable. From this page, players may extend their subscriptions by choosing a payment method and entering their payment information as normal in the secure payment process.

There are various payment methods for RuneScape. Several payment providers who have agreements with Jagex process the transactions, and compete to offer better prices and availability. Sections below contain information from Jagex on all available payment methods.

This method is currently unavailable.

The PaybyPhone payment method is available from payment provider Surfpin to players in the United States, United Kingdom, Canada, Australia, New Zealand, Germany, Ireland, and more. Players wishing to subscribe via PayByPhone call Surfpin's PayByPhone service and receive a PIN redeemable (after a processing period of 15 minutes) for one month of member credit on the RuneScape website. Subscription is paid for by the cost of the call, which is added to the caller's phone bill and is dependent on the country the caller is calling from. Players who subscribe via PayByPhone can unsubscribe simply by not calling again to resubscribe. No longer subscription lengths are currently available through PayByPhone. Further information is available during the secure subscription payment process (instructions for beginning above). This method of payment is not currently available as Surfpin is no longer providing this service.

Players who subscribe via PayBySMS can unsubscribe simply by not sending another text message to resubscribe. No longer subscription lengths are currently available through PayBySMS. Further information is available during the secure subscription payment process (instructions for beginning above).

The provider PayPal offers players a variety of credit card payment options, being you have an existing account with PayPal. PayPal subscriptions are available globally. There is a processing time of less than 1 minute.

By taking advantage of the "Secure Cards" feature provided by the Paypal Plug-in, one can generate a multiple-use virtual Mastercard linked to their Paypal account and use it with the credit card payment option, thus paying the cheaper credit card membership fees. This however is only available to those who have the card before the plug-in was removed.

Offered to German players only, GiroPay is a real-time bank transfer subscription process. When you complete your payment, the cash will be removed from your bank account and paid directly to Jagex. All payments are "One-off" meaning monthly renewal of membership is required, unless you purchase a package which gives you 1,2,3,6, or 12 months at a lump charge.

The provider PayByCash also provides a wide variety of payment methods. PayByCash offers different costs for different lengths of payment, with discounts available for longer payments. Considerably due to the vast amount of options available, please view the link below for a detailed explanation of possible payments options.

One payment option is the Ultimate Game Card. It is a prepaid card sold in the U.S., which can be redeemed on the paybycash site.

Ultimate Game Cards have been discounted as of 31 August 2015. They were sold at the following stores in the U.S.:

Pre-pay cards are sold at Target, 7-Eleven[9], Wal Mart, GameStop, and Rite-Aid stores in the United States, and are available in Britain at Game, Gamestation, Sainsbury's and Boots. There are 2 types of cards:

In United Kingdom, Mexico, Europe, and more, players can pay with a PaySafe-card.

RewardsPay allows one to use a credit card and airline rewards to purchase membership. The service is partnered with Discover Cashback Bonus and United MileagePlus.

With the introduction of Bonds, free players can now obtain membership via purchasing and redeeming bonds, thereby effectively allowing players to pay for membership through their in-game money. Bonds can be purchased from players or via the Grand Exchange. Note that only one bond per offer can be bought at the Grand Exchange. However, once a bond is obtained, another can be bought while making a different offer. Bonds do not stack in the bank, and require individual bank spaces. This method is highly recommended for long time or high-level free players to explore the full game and obtain membership without having to pay real life money.

Bonds can be redeemed for membership on the Marketplace for the following:

Additionally, one bond can be redeemed for a 14-day membership passcode. This will send a code to the players RuneScape inbox (not email) which can be redeemed on another account.

With the release of the game on the Steam platform, three additional membership package options were added:

The price of membership for new subscribers has increased multiple times since RuneScape launched. Members that have not let their membership lapse by 2 weeks since a price increase will be grandfathered in and will only pay the rates that they were paying previously.

Price increases are often met by controversy from players of the game who may not feel that the money they are paying is worth the content that the game provides.