From the RuneScape Wiki, the wiki for all things RuneScape
Jump to: navigation, search
Kayle's chargebow? (edit)

Kayle's chargebow is a stronger version of a regular Chargebow, dropped by Kayle during The Blood Pact quest. It requires no ammunition to fire; instead it produces its own magical arrows to fire at opponents, making it similar to (although much less powerful than) the Crystal bow. If lost, it can be re-obtained from Xenia, outside the Lumbridge Catacombs, along with the other cultists' weapons. Ranged pures can get one by starting the quest, grabbing Kayle's chargebow and then going outside without completing it. 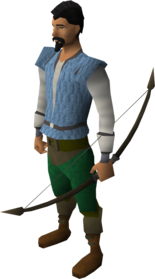