From the RuneScape Wiki, the wiki for all things RuneScape
Jump to: navigation, search
The Old School RuneScape Wiki also has an article on: osrsw:Willow comp bow
Willow composite bow? (edit)

The willow composite bow cannot be made using the Fletching skill and is currently the only composite bow available for free-to-play players. They can also be obtained through trading with another player.

This bow shares its stats with the willow shieldbow, the only real differences being its attack range (one extra in comparison to the shieldbow) and its relative uncommonness. This bow was regarded a status symbol to free-to-play players due to its rarity and price prior to 2010. 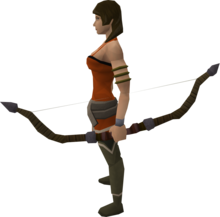