From the RuneScape Wiki, the wiki for all things RuneScape
Jump to: navigation, search
Saradomin bow? (edit)

The Saradomin bow is a shieldbow aligned with Saradomin, requiring a Ranged level of 55 to wield. It can be obtained as a reward from completing an elite Treasure Trail, or as reward from the Giant Oyster. This bow doubles the chance of Saradomin arrows dealing bonus damage (from 10% to 20%). The bow will make the followers of Saradomin in the God Wars Dungeon unaggressive. 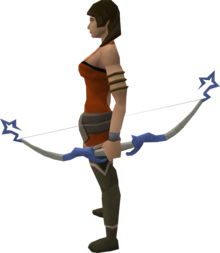 The Saradomin bow has a special attack called Restorative Shot, which uses 55% adrenaline. It deals 100% weapon damage and heals the user twice the amount of damage dealt over time. When Saradomin arrows are equipped, there's a chance to deal an extra 100% weapon damage (Water spell damage), which also adds to the healing effect. The healing effect lasts for a minute and heals 20% of the damage dealt every 6 seconds.