From the RuneScape Wiki, the wiki for all things RuneScape
Jump to: navigation, search
Dark bow? (edit)

The green dark bow is the second most powerful shieldbow in the game, behind the Strykebow and requires level 70 Ranged and 70 Defence to use. While it shoots at little over 7 seconds between attacks (double the time in between attacks (3.6 seconds) compared to other shieldbows), it shoots two arrows with each shot resulting in the same amount of arrows shot over time as any other shieldbow.

It is obtainable by purchasing the green penance egg paint from Commander Connad for 50 points in any role. Once purchased, players can recolour an unlimited number of dark bows and abyssal whips. The dark bow itself is a drop unique to dark beasts, which require level 90 Slayer to kill. When recoloured, the bow is untradeable, but can be reverted to its regular, tradeable state by using a cleaning cloth on it.

It is not possible to use this bow for Barbarian Firemaking. Attempting to light a fire using a dark bow will prompt the following message: "The innate darkness of the bow sucks all heat from your firemaking attempt. You realise that this type of bow is useless for firelighting." 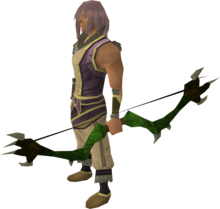