The shortbow is the weakest shortbow in RuneScape. Players can purchase this bow from most shops that sell Ranged weaponry.

Previously, all new players would obtain a free shortbow after completing the Tutorial, but due to the Tutorial update, players no longer obtain one.

The attack range of the shortbow is 7 spaces.

Shortbows are often used by skill pures because if no arrows are equipped a player can not accidentally deal damage to a creature and gain combat xp. 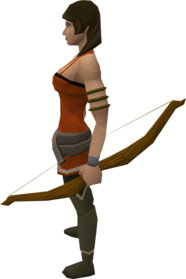 The update history project is a work-in-progress – not all updates to this topic may be covered below. See here for how to help out!
Retrieved from ‘https://runescape.wiki/w/Shortbow?oldid=31573123’
Categories:
Hidden categories: