Alaea crablets can only be found on Uncharted Isles in the Arc region in groups of 5 crablets. Despite being a creature, the crystal deposit on the crablet's back acts as a mining resource, requiring level 97 Mining to be harvested. Mining the crablets produces alaea sea salt, sought after as an ingredient in shark soup. Salts may be sold to Salty Goods in the Waiko market for 5 chimes each.

When a player begins mining a crablet, it becomes a "Relaxed alaea crablet" and ceases movement until the deposit on its back has been depleted, indicated by a yellow bar. The crablet will remain relaxed until the player has mined a total of 40 alaea sea salt. After the bar has expired, the crablet will be depleted and the player will no longer be able to mine from it. If the player logs out or switches worlds, relaxed crablets will resume movement and will retain their resource depletion progress. 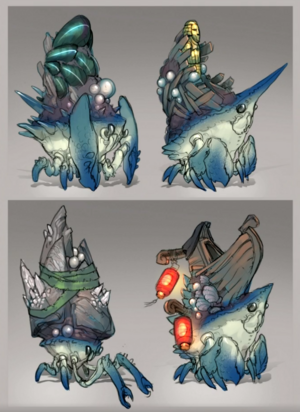