From the RuneScape Wiki, the wiki for all things RuneScape
Jump to: navigation, search
For other gem rocks, see gem rock.
Prifddinas gem rock 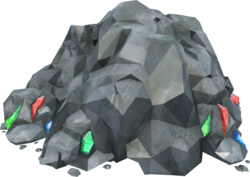 Prifddinas gem rocks are rocks containing gems, found within the Trahaern district in Prifddinas. They can be mined by players with a Mining level of 75 or higher.

The gem rocks in Prifddinas previously gave a chance to receive an uncut onyx when mined. However, a hotfix update on 11 March 2019 removed onyxes from the rock's drop table due to the large number of onyxes entering the game via these rocks.[1] As a result of this change, Rare gem rocks give more experience and money despite having slightly higher durability and requiring a lower mining level.