From the RuneScape Wiki, the wiki for all things RuneScape
Jump to: navigation, search
Exhausted silver rock? (edit) 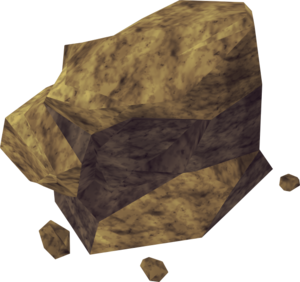 The exhausted silver rock was a silver-bearing rock in the Al Kharid mining site. Unlike the other 5 rocks, this one could only be mined by any given player once, after which it was mined to the point where it had no more silver ore. It was in a line with 3 other silver rocks, with itself being the south-westernmost one.

After players mined this rock, they would get a message saying "This rock has become exhausted due to heavy mining. Please use one of the other rocks." After mining, the rock lost its "mine" option and appeared like any other rock with no ore.

This particular rock was exactly the same as all the other silver rocks in RuneScape prior to the Mining and Smithing rework except for the fact that it would never respawn. Players arriving at the Al Kharid mining site for the first time often mined this rock but others could not see it available to mine. To other players, it looked as if the player was mining an empty rock.

Mining this rock counted towards the Lumbridge achievements.