From the RuneScape Wiki, the wiki for all things RuneScape
Jump to: navigation, search
Feldip swamp rock 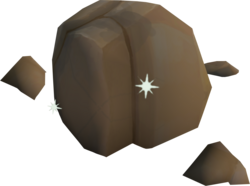 Feldip swamp rocks are rocks within the Feldip Hills that may be mined to produce generic rock items. They may be mined at any Mining level.

Their primary function is to be used to provide rocks for use in hunting jubbly birds during and after Recipe for Disaster: Freeing Skrach Uglogwee.

Prior to the Mining and Smithing rework, they were known as Pile of Rock, and behaved differently. Unlike most rocks, they could be mined three times, with the pile shrinking and a rock item being produced each time it was mined. After being completely exhausted, the pile would respawn a short time later. The pile would also eventually refill after being mined just one or two times, but this took longer than respawning after being completely exhausted.