From the RuneScape Wiki, the wiki for all things RuneScape
Jump to navigation Jump to search
For the higher-levelled tortle, see Ornate tortle.
For the quest NPC, see Tortle (Curse of the Black Stone). 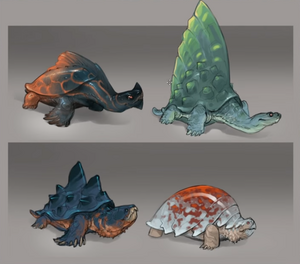 A tortle is a Hunter creature which is found both on Whale's Maw and in groups of nine on the Uncharted Isles. 90 Hunter (which can be boosted) and a tortle trap is required to catch them, available for free at the Torts R Us shop run by 'Reggie' (tortle shell merchant) on Waiko. They cannot be caught using protean traps.

When caught, they drop shell chippings, which can be used to make a Tortle shell bowl. Tortles may also rarely drop a taijitu and chimes when caught. It is possible to catch an unlimited number of tortles. At level 99 Hunter a player can gain around 261,000 experience and 890 chimes an hour from hunting tortles. Using an enhanced yaktwee stick and the hunter's outfit players may gain around 290,000 experience an hour. Using the Sliske's Endgame rewards (Ring of Whispers, Combined Catalyst fragment and Necklace of Shadows) with the above will further boost this to around 400,000 experience an hour.

Their higher-tiered counterpart, the ornate tortles, can yield a much higher rate of experience per hour, but require at least 96 Hunter to capture. Tortle colonies on Uncharted Isles may occasionally spawn an ornate tortle.