Gem rocks were a unique type of rock that would yield gems, rather than ore, when mined. They were significantly altered in the Mining and Smithing rework on 7 January 2019, when the single type of gem rock found in multiple locations across RuneScape was replaced with a range of different types of gem rock.

Level 40 Mining was required to mine these rocks. Like the new gem rocks that replaced them, the gems received from mining were random - rocks were not bound to specific gems (except for the rocks found during The Tale of the Muspah quest). It was rare to receive more expensive gems such as rubies and diamonds.

Gem rocks took about a minute and twenty five seconds to respawn. Gems were mined at a faster rate while wearing a charged amulet of glory and ring of Wealth. Wearing a ring of Wealth would also give a small chance to get two gems from one rock (a message would appear when this occurred). The chance of mining an additional ore while wearing Varrock armour did not apply to the gem rocks.

The gems available at the majority of gem rocks were as follows (see individual locations below for exceptions):

The location of these gem rocks were as follows.

After completing the Shilo Village quest, access to the gem rocks was obtained, containing all Semi-precious gems, Sapphire, Emerald, Ruby, and very rare Diamonds. Additionally, the underground gem mine could be accessed after completing hard tasks of Karamja Diary.

These gem rocks were subsequently replaced with precious gem rocks.

After completing Lunar Diplomacy, players gain access to three gem rocks within the Lunar Isle mine.

These gem rocks were subsequently replaced with rare gem rocks.

The Al Kharid mining site resource dungeon requires a Dungeoneering level of 75 to access. Seven gem rocks were found here as well as lower level implings that could be caught while waiting for rocks to respawn.

These gem rocks were subsequently replaced with precious gem rocks, in addition to new common and uncommon gem rocks being added to the surface Al Kharid mine.

The 8 Prifddinas gem rocks, found in the Trahaearn district, would yield different gems than other gem rocks found in RuneScape. Unlike the other rocks, they did not contain uncut opal, jade, or red topaz, but instead offered the chance to mine uncut gems from sapphire to onyx as well as spirit gems up to dragonstone. With a crystal pickaxe, a player could expect to mine about 336 gems per hour. With a crystal pickaxe and a charged amulet of glory, a player could mine around 600 gems an hour instead.

These gem rocks were subsequently replaced with Trahaearn gem rocks.

The Kal'gerion dungeon requires a Dungeoneering level of 90 to access. It contained ten Kal'gerion gem rocks, which gave slightly more experience than regular gem rocks, and were the only rocks to contain uncut dragonstone.

These gem rocks were subsequently replaced with rare gem rocks.

Gem rocks could appear in resource dungeons reached through the explorer's aura's portal. However, the aura was removed from the game after an update.

Based on a sample of 1000 consecutively mined gems in Shilo Village with a rune pickaxe and no luck modifiers (as of March 2017), the chance of mining each type of gem was as follows:

Based on a sample of 250 consecutively mined gems at the Lunar Isle mine, with a ring of Wealth and a dragon pickaxe (as of March 2018), the chance of mining each type of gem was as follows:

Based on a sample of 501 consecutively mined gems at the Al Kharid Resource Dungeon with a rune pickaxe, the chance of mining each type of gem was as follows:

Based on a sample of 11,771 mined gems at the Prifddinas gem rocks with a rune pickaxe, the chance of mining each type of gem was as follows:

Based on a sample of 1,000 consecutively mined gems at the Kal'gerion dungeon without a charged amulet of glory, the chance of mining each type of gem was as follows: 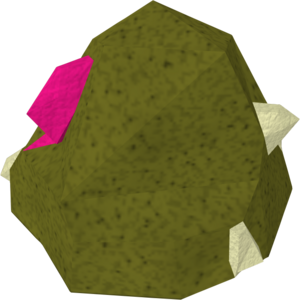 Gem rocks can be found randomly while hacking jungle in the Tai Bwo Wannai Cleanup minigame. When the player discovers one, a message appears saying: "The jungle parts to reveal a gem-rich rock". Unlike the other regular gem rocks, this rock could be mined three times before disappearing (prior to the Mining and Smithing rework). These rocks had gems encrusted on the surface, which would disappear as the player mined the rock. The colours of these gems were not an indication of which gems the player would actually receive.

The Tale of the Muspah[edit | edit source]

During The Tale of the Muspah there are gem rocks that contain only sapphires. No experience is gained from these rocks and they cannot be mined again.