A player wearing all the pieces of the golden mining suit

The Golden mining suit is an experience-boosting set obtained from the Liquid Gold Nymph, located in the Lava Flow Mine. You must have completed the quest King of the Dwarves to mine in the lava flow mine. It provides a small boost to experience received when mining - a total of 6% when the full set is equipped.

Players could also buy random pieces of the outfit from Vic the trader when he re-appeared on 12 June 2017. They did not need to complete King of the Dwarves to buy the outfit pieces.

If a full set is owned and stored in bank or Armour case of a POH while a complete Magic golem outfit is worn, the bonus will be in effect.

The suit can be stored in the armour case of the player-owned house. 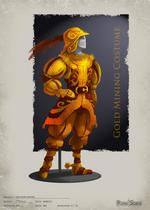