From the RuneScape Wiki, the wiki for all things RuneScape
Jump to navigation Jump to search
Mushroom cluster? (edit) 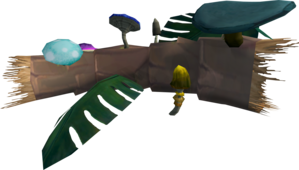 Mushroom clusters can be found on Goshima, The Islands That Once Were Turtles and the Uncharted Isles. Clusters from the former two require level 90 Farming in order to be harvested, while the latter requires level 94 Farming. The mushrooms gathered from clusters can be sliced, producing sliced mushrooms. This requires level 86 Cooking and 90 Farming, which may be boosted. Different numbers of mushrooms are required to produce one portion, depending on the type of mushroom.

Clusters on Goshima and the Islands That Once Were Turtles have 30 mushrooms available before being depleted, taking one minute to replenish their stock. There are four clusters on the former and five on the latter, albeit scattered across three islands.

Clusters on the Uncharted Isles are considered a "rare" resource and are only rolled after rolls are made for golden bamboo, alaea crablets, ornate tortles and wobbegong nodes. As these resources are rolled up to three times, typical large voyages to the Uncharted Isles will yield anywhere from 0-2 mushroom clusters. These clusters have 100 mushrooms available before being depleted, accompanied with the message The mushrooms have become exhausted for today. These clusters resets daily at 00:00 UTC.

Regardless of the cluster being harvested, a health bar appears over the cluster indicating how many mushrooms may be picked before the node depletes. This is also accompanied with visual indicators at various percentages.

While foraging, every 100 experience drops (includes failed mushroom gathers) players will be pricked by a thorn, disrupting their foraging, and damaging the player equal to 5% of their maximum life points. Players can prevent this by clicking on the mushroom cluster at any time to reset the timer. If pricked, the following message will display: Ouch! You were pricked by a thorn.

The player-owned farm perk "uncapped potential" from elder zygomites does apply here for an extra 7% chance of foraging an additional mushroom (or 10% for the tier 2 perk).

The location and amount of mushrooms required to produce one sliced mushroom can be found listed below: 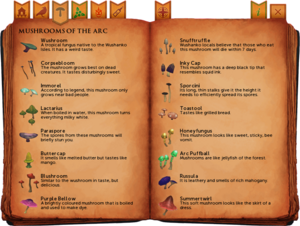 The Islands That Once Were Turtles[edit | edit source]