From the RuneScape Wiki, the wiki for all things RuneScape
Jump to navigation Jump to search
The Old School RuneScape Wiki also has an article on: osrsw:Magic stone (Tears of Guthix)
This article is about the Magic stone used in Tears of Guthix. For the Magic stone used in Construction, see Magic stone.
Item JSON: {"edible":"no","disassembly":"yes","stackable":"no","stacksinbank":"yes","death":"reclaimable","name":"Magic stone","bankable":"yes","gemw":false,"equipable":"no","members":"yes","id":"4703","release_date":"4 May 2005","restriction":"quest","release_update_post":"Earthquake Rocks Lumbridge","lendable":"no","destroy":"Drop","highalch":1,"weight":2.267,"tradeable":"no","examine":"Doesn't look very special.","noteable":"no"}

The Magic stone is used in the quest Tears of Guthix to make the stone bowl. It is mined from rocks near Juna within the Magic stone mine. You must have a sapphire lantern with you in order to access the stones, and partial completion of Tears of Guthix is required to make the stone bowl. Use the sapphire lantern on a light creature and select to go "across the chasm" and you will see the ores ahead.

According to Juna, the cave from where the rocks originate is infused with the power of Guthix in a similar manner to the tears themselves, explaining why the bowl crafted from the stone is capable of holding the Tears of Guthix. 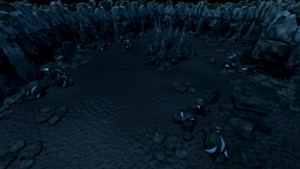 The Magic stone mine

This information has been compiled as part of the update history project. Some updates may not be included - see here for how to help out!
Retrieved from ‘https://runescape.wiki/w/Magic_stone_(Tears_of_Guthix)?oldid=35635375’
Categories:
Hidden category: