Crust can be mined in the Lava-flow mine with level 68 Mining. In order to access the mine, the King of the Dwarves quest must be completed. The benefit of mining here is that one does not have to carry ore or rocks to the bank, similar to Choking ivy for Woodcutting. Gems can be found while mining, and the chance is increased if one helps the TzHaar hero catch a lava monster. Crust must be mined away because it blocks the lava streams in the mine, which are just above rock's melting point, and blockages would cause the machinery to malfunction, and as such should be mined away quickly, as everything in Keldagrim feeds on the geothermal energy generated by the mine.

The experience given by mining the crust is dependent on the flow of the lava. Every few minutes, the slowest flow rate (50% blockage) will switch to another segment of the mine. One can run around and check the steam gauges to see where it is, or simply ask Foreman Jaak at the entrance, who will say the channel (A, B, C or D) but not the exact segment. 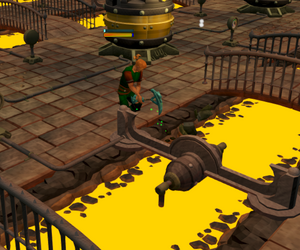