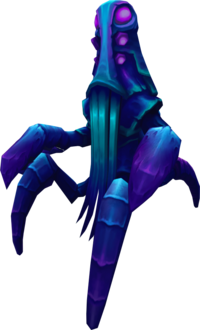 The Crassian scout is an attackable NPC that can be found randomly on Uncharted Isles. They may be killed for combat experience and chimes. While not aggressive, they are accurate and can hit hard if players are unprepared for combat. The scouts are usually found in large groups along with Crassian warriors, making it very dangerous to use area-of-effect attacks or abilities against them.

Crassican scouts on uncharted isles use a projectile attack to attack from afar, though this attack is considered a melee attack. Attacking the scouts will scale their life points and combative abilities to the player's own combat level.

The crassians will always be found near some seaweed; this acts as their respawn point.