From the RuneScape Wiki, the wiki for all things RuneScape
Jump to navigation Jump to search
The Old School RuneScape Wiki also has an article on: osrsw:Daeyalt ore
"Daeyalt" redirects here. For the rocks that Daeyalt ore is mined from, see Daeyalt rocks.
Item JSON: {"edible":"no","members":"yes","stackable":"yes","stacksinbank":"yes","death":"reclaimable","name":"Daeyalt ore","bankable":"yes","gemw":false,"equipable":"no","disassembly":"yes","release_date":"4 September 2006","id":"9632","release_update_post":"Myreque Pt III - Darkness of Hallowvale","lendable":"no","destroy":"Drop","highalch":40,"weight":0,"tradeable":"no","examine":"This needs refining.","noteable":"no"} 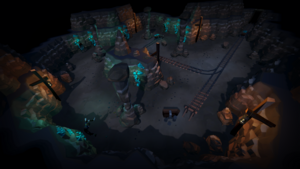 Slaves are mining Daeyalt ore in the mine 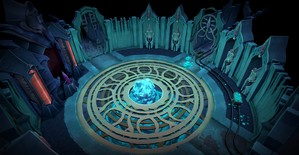 Daeyalt ore is a rare ore created from the Stone of Jas.[1] It can only be mined by players with a Mining level of 20 during and after The Darkness of Hallowvale quest, gaining approximately 17.6 experience. It cannot be smelted into a bar. According to those working the Meiyerditch mine, the ore mined in Meiyerditch is taken to a massive underground refinery; however, the nature and purpose of this process is unknown.

During River of Blood, it is revealed that Daeyalt ore is used during the process of vampyrisation, serving as a catalyst for easing changes between states. Later, refined daeyalt is used as one of the ingredients used in making a serum to cure human-born vampyres.

If players are sent to the mine by the Vyrewatch, they must mine 15 ores and place them in the mine cart, then ask to be released from the mine.