From the RuneScape Wiki, the wiki for all things RuneScape
Jump to navigation Jump to search
This article is about the Starlight ore. For other uses, see Starlight (disambiguation).
Item JSON: {"edible":"no","disassembly":"no","stackable":"yes","stacksinbank":"yes","death":"always","name":"Starlight ore","bankable":"yes","gemw":false,"equipable":"no","members":"no","id":"28090","release_date":"26 April 2013","restriction":"removed","release_update_post":"Squeal of Fortune: Starfire & Starfury Weapons","lendable":"no","destroy":"Are you sure you want to destroy this item? You cannot reclaim them; you can only find more.","highalch":false,"weight":0,"lowalch":false,"tradeable":"yes","examine":"A piece of ore, fallen from a star. Talk to Ivar in the Artisan's Workshop for more information on how it can be used.","noteable":"no"}

Starlight ore is an ore obtained through Mining and Treasure Hunter, available from 10 September 2015 to 15 September 2015. It was previously available on the Squeal of Fortune from 26 April 2013 to 6 May 2013. It appeared in quantities of 906–1100 ores as a "common" reward in the Squeal of Fortune that has a set coin convert value of 500 regardless of the amount. They also appeared rarely while mining in batches of 61–100 during the second appearance. Players had a chance of receiving ore while mining at approximately ten minute intervals while logged in, not all of which had to be spent mining.

It is a component for forging starfire equipment. To forge a starfire weapon 10,000 starlight ores and blueprints for a starfire sword, bow, or staff were required. Starfire equipment is needed to create starfury equipment, alongside starborn diamonds. The player is able to speak to Ivar of the Artisans' Workshop to find out more about creating starfire and starfury weaponry.

Starlight ore can be obtained from mining any ore, with higher level ores producing larger amounts. The amount of starlight ore received while mining ranged from 20 - 100. Starlight ore can also be received when mining in the Lava Flow Mine. The most efficient way to collect the ore was by accessing the Living Rock Caverns and mining concentrated gold deposits, where decent amounts could be found within a short period of time.

Starlight ore was originally unobtainable after 6 May 2013, and disappeared from players' banks on 20 May 2013, after a 1 week notice warning the players. It was removed on 28 September 2015. 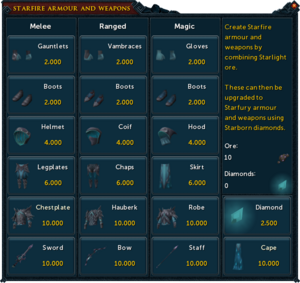 The interface for ore conversion during the second promotion

To upgrade all starfire equipment to starfury will cost 47,500 starlight ore, assuming the player possesses no starfury items from a previous promotion, and does not win any starborn diamonds from Treasure Hunter.

A total of 159,500 starlight ore is required to purchase and upgrade all items to starfury.