From the RuneScape Wiki, the wiki for all things RuneScape
Jump to navigation Jump to search
Wikipedia also has an article on: wikipedia:Wobbegong
Item JSON: {"edible":"no","disassembly":"no","stackable":"no","stacksinbank":"yes","death":"always","name":"Raw wobbegong","bankable":"yes","gemw":false,"equipable":"no","members":"yes","id":"37768","release_date":"25 July 2016","release_update_post":"The Arc & Uncharted Isles - Invention XP - Flourishing Fairy Outfit","lendable":"no","destroy":"You will have to catch sharks in the Wushanko isles in search of more of this item.","highalch":false,"weight":0.55,"lowalch":false,"tradeable":"no","examine":"A shallow-water shark with a small beard. I can cook this to make fish oil.","noteable":"no"}

Raw wobbegong is a fish that may be caught and found washed ashore on Uncharted Isles. Wobbegongs require level 96 Fishing to catch, giving 682.5 experience each.

Two raw wobbegongs can be cooked to produce wobbegong oil, requiring level 96 Cooking, and granting 240 Cooking experience if successful. Burning wobbegongs produces burnt wobbegongs. It is highly recommended to cook wobbegongs at the grill in Waiko or a Portable Range for the chance to double obtained oils where both methods have the same chance to double.

Raw wobbegongs may be sold to the Fish Oil Sales shop in Waiko for 3 chimes each. 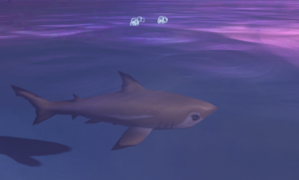 There are rare sharks swimming in the shallow sea.
Retrieved from ‘https://runescape.wiki/w/Raw_wobbegong?oldid=35794500’
Categories:
Hidden category: