From the RuneScape Wiki, the wiki for all things RuneScape
Jump to navigation Jump to search
Loading...
ItemScenery
Item JSON: {"edible":"no","members":"yes","stackable":"no","stacksinbank":"yes","death":"reclaimable","name":"Tortle portal","bankable":"yes","gemw":false,"equipable":"no","disassembly":"no","release_date":"10 October 2016","id":"38746","release_update_post":"The Arc – Chapter 2","lendable":"no","destroy":"You will need to purchase another customisation from a reward vendor in the Wushanko Isles.","highalch":1,"weight":20,"tradeable":"no","examine":"Now you're thinking with tortles. Add a pair of tortle portals to your claimed island to tortleport between them.","noteable":"no"}

Tortle portals are portals with which one can teleport between The Islands That Once Were Turtles. There are five tortle portals on those islands.

For a large claimed uncharted isle, a set of two tortle portals can be purchased from Boni's Waiko Reward Shop for 350 chimes each, after all the portals on The Islands That Once Were Turtles have been charged. Players may use either these tortle portals to either tortleport to the other one, or to Halia (divine merchant).

The first portal is on the eastern island with the former Skulls' fortress. It can be charged without any energy, but does require level 90 Divination (can be boosted) to do so. It leads to the middle island with Halia, the divine merchant.

Charging all tortle portals is one of the requirements, Ancient Eastern Tortle Portals, needed to wear the completionist cape. 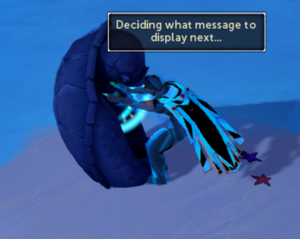 A player activating a tortle portal.