From the RuneScape Wiki, the wiki for all things RuneScape
Jump to: navigation, search
Salty crabletine 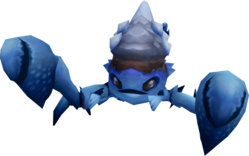 Salty crabletines are young crablets, and despite being a creature, the crystal deposit on their back acts as a mining resource. Mining the deposit requires level 90 Mining, and yields sea salt; an ingredient required in making arc gumbo. Ten salty crabletines can be found on the north-west shore of Cyclosis and seven can be found on eastern Aminishi.

When clicking on a crablet to mine, they will become stationary. Salty crabletines may be mined randomly between 4-5.5 minutes before exhausting the salt crystals on their back. Each crablet has a unique timer, which does not stop even if the player stops mining a crablet, or begins to mine another. The following message is shown when their salt crystals have depleted: "The salt crystals on the nearby crablet have disappeared."

Mining boosts such as the Quarrymaster aura, Golem outfits, and Invention Perks do affect the number of salts mined from the crablet; the effects of the Perfect juju mining potion and normal Juju mining potion will not activate from mining the crablet however.

The update history project is a work-in-progress – not all updates to this topic may be covered below. See here for how to help out!
Retrieved from ‘https://runescape.wiki/w/Salty_crabletine?oldid=33327844’
Categories:
Hidden categories: