From the RuneScape Wiki, the wiki for all things RuneScape
Jump to: navigation, search
Concentrated coal deposit 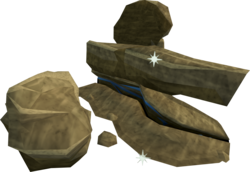 Concentrated coal deposits are clumps of coal located in the Living Rock Caverns beneath the Dwarven Mines. They require level 70 Mining to mine and have a durability of 500, a hardness of 140, and an experience multiplier of 0.8. There are eight of these deposits in the caverns. Concentrated coal deposits contain a much larger supply of coal than a normal coal rock, granting five ores at once. This bonus stacks additively with the bonuses from Varrock armour, the Mining cape's perk, and the reward from the Shooting Star Distraction and Diversion, potentially resulting in a total of eight ores at once. Additionally, they consume five coal stone spirits to produce five additional coal each time they are mined. Unlike coal rocks, these grant igneous geodes rather than sedimentary geodes.

The deposits are guarded by the creatures of the Living Rock Caverns, the living rock protectors, living rock strikers, and living rock patriarch. These monsters are aggressive and pose a threat to any players mining from the concentrated deposits, so it is generally advised to mine on world 83, the official world for the Living Rock Caverns. Multitudes of players mine and fish in the Living Rock Caverns on this world, lessening an individual player's chance of coming under attack. However, the extremely high volume of players on this world may make lag an issue for players with lower-performance computers or slow internet connections. Alternately, a magic golem outfit or a complete set of any shark outfit will render the creatures non-aggressive, allowing players to use any world.

By using an Augmented Pickaxe of Earth and Song; having a Mining cape equipped, a lava titan familiar summoned, and legendary quarrymaster activated; drinking a juju mining potion; and wearing a magic golem outfit, one can gain at least 8,500 item experience per hour

The low health of these deposits means high-level miners will receive ore on almost every other swing. Thus, players using a perfect juju mining potion with signs of the porter and a stack of coal stone spirits will refresh their stamina almost every other swing. Thus, despite their relatively low experience multiplier, concentrated coal deposits are some of the best mining nodes for AFK training.