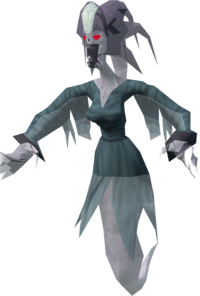 The Banshee mistress is an exceptionally strong banshee, and acts as the final boss of the Smoking Kills quest. She is located at the northern end of the Pollnivneach Slayer Dungeon. To enter her chamber, players must have a Banshee voice. She is inaccessible after the quest.

When she is at half of her full life points, she will call her minions to help. When this happens, four level 81 Insectoid assassins will attack with powerful ranged attacks. When you kill her, the assassins vanish and a cutscene is played. It is strongly recommended that players wield masked earmuffs before attempting to fight her and also whilst in the cave; otherwise there is a very high risk of death.

Due to an update, if a player dies while fighting the Banshee mistress, they will now automatically keep the masked earmuffs and their gravestone will spawn next to the well in Pollnivneach.

It is recommended that players wear their best dragonhide armour, as the mistress uses a magic-based melee attack and the spell Water Blast.

During the fight, players should stand next to the mistress, using Protect from Melee and eating when necessary. When the mistress says, 'Minions, aid me', the player should quickly swap to Protect from Range or the player could be hit for up to 800 life points (The rangers hit a max of 200 and there are 4 of them.) Players should then watch their health and prayer carefully and eat as often as required.