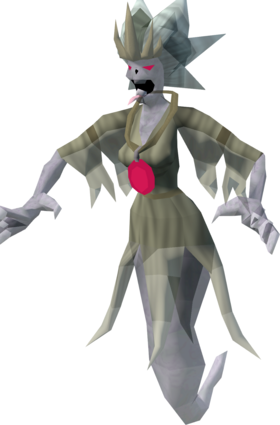 The Banshee Champion is one of the 16 champions fought as part of the Champion's Challenge distraction and diversion. Like the other champions, it may be fought beneath the Champions' Guild, but only after a player finds a Banshee champion scroll, which is a very rare drop from banshees and mighty banshees. After being the defeated the first time, it may be fought again weekly for additional slayer and constitution experience.

Like the other champions, there is a special restriction during the fight with them. In this case, prayer and melee attacks are prohibited, meaning magic or ranged must be used instead. As it is a banshee, wearing ear protection such as earmuffs, a mask of mourning or a slayer helmet is highly recommended to avoid its screech attack, which is capable of hitting 1,000 and draining combat stats. It attacks with magic, and should be relatively easy to defeat as long as a proper helmet is used.

Even though it is a banshee, it doesn't count for a Slayer assignment against banshees.