From the RuneScape Wiki, the wiki for all things RuneScape
Jump to navigation Jump to search
The Old School RuneScape Wiki also has an article on: osrsw:Scout (Tree Gnome Stronghold)

The Tree Gnome Stronghold Scout is one of the four scouts from The General's Shadow miniquest. The ring of visibility must be worn to see him, the ghostspeak amulet worn to talk to him, and the full set of Ghostly robes worn for him to recognise you as a messenger for General Khazard.

He is located to the south of the Tree Gnome Stronghold. The scouts radius is from right by the entrance to near the orchard, circling around the Apple orchard, and up to where the Hobgoblins are camped. There is currently a glitch where in the chat menu while talking to him, his face will begin to stretch. This NPC is one of the few NPCs that still uses old RuneScape 2 animations. 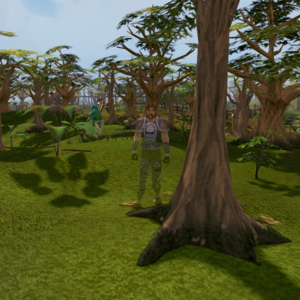 This information has been compiled as part of the update history project. Some updates may not be included - see here for how to help out!
Retrieved from ‘https://runescape.wiki/w/Scout_(Tree_Gnome_Stronghold)?oldid=35814509’
Categories:
Hidden categories: