From the RuneScape Wiki, the wiki for all things RuneScape
Jump to: navigation, search
The Old School RuneScape Wiki also has an article on: osrsw:Evil spirit
This article is about the monster. For the music track, see Evil Spirit (music track). 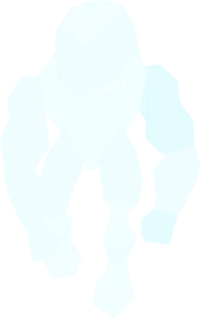 The Evil spirit is the boss in Rum Deal. It only attacks with Melee, so turning on Protect from Melee or Deflect Melee is sufficient in protecting a player from most damage. High-levelled players should not worry about this battle, as the spirit is rather weak, has no weakness, and has few life points for its level.

The 'pun intended' comment on its examine text is a reference to a spirit, which is a type of alcohol and Braindeath rum, which is an evil alcohol.

A two-handed weapon can kill it relatively quickly. Poison is not necessary, as the spirit is immune to its effects. If a player is above level 80 and uses Protect from Melee, there is little need for food.