From the RuneScape Wiki, the wiki for all things RuneScape
Jump to: navigation, search
Not to be confused with Armod.

He built and took up residence in the mansion featured in the quest, not knowing that the home was situated over the long-since abandoned Senntisten Insane Asylum.

Whether his family was with him before or after he built the mansion is unknown, but his wife was unfortunately taken by the pox. When she was afflicted by the illness, he chose to rather focus on his work, feeling that financial stability for his family and home-stead took priority. When she died, he was left to care for their son Lenian, but saw him as a burden. He assigned him to a single room in the house, along with a nanny to care for him so that he did not need to keep him in mind.[1] 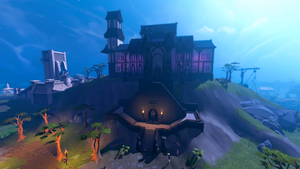 The nanny made a severe mistake in the eyes of Ormod though, and he felt he had to discipline her, to the point of killing her. He felt no remorse, deciding it was her own fault. Eventually he remembered he'd locked his Lenian in his room, but it was far too late, and the he had starved to death.

During all of this, Ormod was growing senile. He had decided instead that he had been cursed with madness. He sought the wizards for help, but when they reported to him that his affliction was not from magical origin, he cut ties with them, insulted them and delved into his own researches to try and discover the source of his non-existent curse.

The death of his family and his growing senility made him decide that his life was not worth living. In his final hours, he poisoned himself and locked the mansion, trapping all of the servants within and killing every one of them, to save them from the 'curse of the house' and instead allow them to die with some novelty.[1] 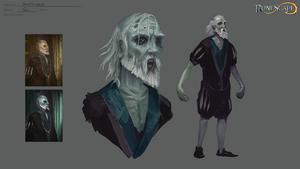 In year 169 of the Fifth Age, Ormod returned to haunt the house as he feels guilt and responsibility over Lenian's death, coupled with the arrival of Ingram and his servants, seeing them as more people to kill. He did not appear to be aware that Ingram was one of his descendants. Ormod used his magic to lock the house, preventing anyone from escaping, and began his sadistic killing spree. Fortunately, one of Ingram's servants, Maria, was able to escape and flagged down a passing adventurer to stop Ormod.

The adventurer cautiously navigated through the mansion, avoiding Ormod and found his son, Lenian, who correctly guessed that Ormod was filled with guilt over his death and that he would be able to peacefully move on if comforted. Before the two could bring Ormod out, the ghostly waif appeared and consumed Lenian before chasing after the adventurer. The adventurer was able to avoid the monster and launched a spell constructed with the research of Nabor, Ormod and Ingram, curing it of its insanity. The monster introduced itself as a demon, Senecianus, and was informed by the adventurer that they had eaten Lenian. Senecianus recalled this and gave the adventurer the option to choose Ormod's fate. He could disguise himself as the spirit of the son to either forgive Ormod, offering him what he needs to pass into the after-life peacefully, or to lure him in to devour his soul.

Regardless, Ormod's presence in the mansion was gone, but enough damage had been dealt by both him and the formerly insane Senecianus, leaving no survivors behind.

Transcripts Ormod is the author or co-author of: