From the RuneScape Wiki, the wiki for all things RuneScape
Jump to: navigation, search
The Old School RuneScape Wiki also has an article on: osrsw:Necrovarus
Necrovarus? (edit)? (edit) 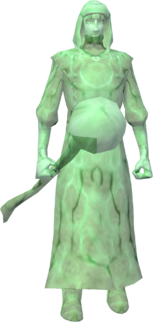 Necrovarus is a ghostly priest and mage, as well as the creator of the Ectofuntus. He arrived in Port Phasmatys from the Eastern Lands.[1] He is the main antagonist in the Ghosts Ahoy quest.

At some point in recent history, when the vampyres of the Sanguinesti region rediscovered the settlements north of Mort Myre, they immediately imposed blood tithes on all the villages and lordships, including the thriving Port Phasmatys on the north-east coast. The residents' numbers dwindled as the blood tithes took their toll, at which point Necrovarus arrived from the east, claiming he had had a vision of a great power source to repel the vampyres.[2] He had the villagers delve beneath the port, and they discovered a large reservoir of ectoplasm, from which they built the Ectofuntus. This resulted in a magical barrier around the port, which Drakan and his vampyres were unable to cross, keeping them at bay.[3] During the artefact's construction, one of Necrovarus's disciples had turned against him before the project was finished, and fled.[4]

In 169 of the Fifth Age, one of the residents of Port Phasmatys, Velorina, enlisted an adventurer's help to stop Necrovarus's scheme. Upon finding out, the priest dismissed the possibility of danger and threatened the adventurer to stay away. However, they found the disciple that had run away, now an old woman, and with her help they were able to find and translate the book of Haricanto in order to enchant a ghostspeak amulet to be able to issue a single command to ghosts, after an unsuccessful attempt to diplomatically coerce him into allowing the townsfolk to pass on through a petition.

Using the enchanted amulet, the adventurer once more confronted Necrovarus, commanding him to let any soul who so wishes pass on to the Grim Underworld, and he was forced to comply, surrendering to the adventurer when threatened with a worse fate. He remains at the Ectofuntus with his disciples today, but has little influence left in the town, although some of the ghosts still support him.

Transcripts Necrovarus is the author or co-author of: