The Ghostly piper is a ghost musician that plays on his bagpipes. There are currently three ghost musicians in RuneScape, the others are Bill Blakey south of Mort Myre swamp and Boris Barrington in Darkmeyer. He is one of the musicians available to free-to-play players, residing in level 38 of the Wilderness, on the eastern side of Red Dragon Isle. Listening to him will make a music icon appear over the Run toggle near the minimap, indicating the increase in the rate of regeneration. Be warned, player killers can attack you here.

Talking to the Piper with the Ghostspeak amulet equipped will allow you to learn a little more about his past. Addressing him without it will only produce unintelligible Ghostspeak. Unlike most musicians, he is not able to tell you about the effects of resting, just information about himself.

He was a piper at the front of Saradomin's Army during the God Wars. His job was to play for the troops of Saradomin as they went into battle, and claims the last thing he remembers is playing the Call to Arms as Saradomin's Army prepared for battle. It is highly likely that he was killed soon after by the forces of the enemy, and a skeleton which obviously belongs to him can be found a few short paces away with his effects scattered about it, and the examine text He looks kind of familiar. Though he died several thousand years ago, his apparel has remained in near-perfect condition. 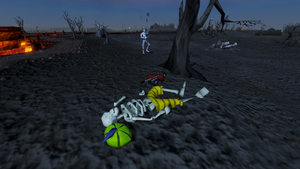 The remains of the Ghostly Piper.

This information has been compiled as part of the update history project. Some updates may not be included - see here for how to help out!
Retrieved from ‘https://runescape.wiki/w/Ghostly_piper?oldid=35698171’
Categories:
Hidden categories: