From the RuneScape Wiki, the wiki for all things RuneScape
Jump to navigation Jump to search
"TW" redirects here. For the ability, see Tuska's Wrath.

The tormented wraith is the spirit of a prisoner who was tortured and killed long ago by the Kinshra (Black Knights). It resides in the Spirit Realm and can be accessed through the invisible portal at the centre of the Dark Warriors' Fortress using Jennica's ring. To access the portal, equip Jennica's ring, right click, and use the "Operate" function while standing in front of the hanging skeleton. Completion of Summer's End is required to access this area.

The wraith can only be attacked if you wear either regular or elite black armour (helm, body, and legs) and have equipped a black item in both the main- and off-hand weapon slots (a 2H sword will work). Only base armour without trim will work. While in combat with the tormented wraith, players cannot change their equipped items.

The tormented wraith is the only monster besides the Corporeal Beast to drop holy elixirs, which are used to make blessed spirit shields. It can also drop regular spirit shields and has a fairly high drop rate of blue charms.

Tormented wraiths count as a ghost for the purpose of a Slayer assignment. Killing the wraith is a requirement for the Wilderness Tasks.

To access the area, Jennica's ring must be operated while worn. It doesn't need to be worn when fighting the tormented wraith.

The tormented wraith is a moderately strong ghost with a weakness to bolts. To kill it, you will need to meet these requirements: 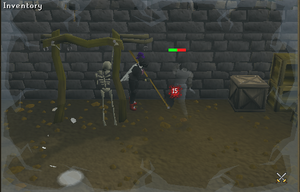