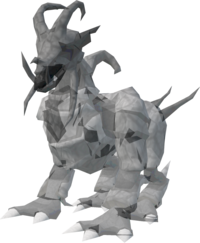 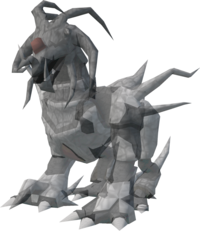 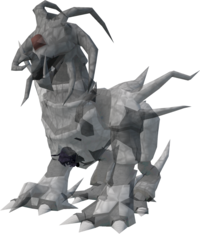 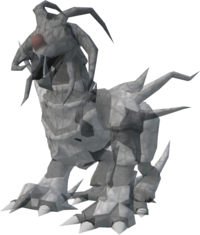 The Spirit Beast is a creature encountered during the Spirit of Summer and Summer's End quests. It feeds on souls.

Players do not attack the Spirit Beast directly, but instead capture it using discs in the quest. To weaken it, players must be with the Summoned Familiar and the Spirit Beast on the disc. If the beast gets too close to the familiar, it ends up devouring the familiar. Players must do this three times to weaken it completely so that it can be trapped. It is never fully defeated at the end of the quest.

Trapping the beast requires speed and precision, and since it cannot be fought, it is considered more of a challenge than a fight.

The Spirit Beast has been terrorising the towns and villages in the Wilderness for hundreds of years. The beast is the one spoken about in the Ruins while wearing the Amulet of Ghostspeak, as voices of the weakened spirits have been occasionally heard in certain areas of the Wilderness.

The Spirit Beast is known to devour spirits of people (or any other creatures), making them weak and unable to communicate with the real realm of RuneScape. These spirits, once weakened, are unlike the usual ghosts in RuneScape, where they cannot be understood even with the help of the Amulet of Ghostspeak. Wandering as helpless shadows trapped within the Spirit Realm, they are doomed to suffer in horrible agony for eternity, the beast slowly feeding upon their life force and imprisoning them within its domain. 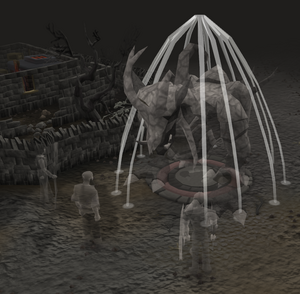 The Spirit Beast at the end of the Spirit of Summer quest.

However, Summer Bonde is able to enlist the help of an adventurer. She, her father Erik Bonde, and his farmhands Jallek Lenkin and Meranek Thanatos, are able to trap the beast using the ancient power of spirits and discs. The adventurer had helped weaken the beast by luring the beast onto the discs using a Spirit familiar. However, the help of the adventurer makes the beast stronger, as it absorbs the adventurer's soul even as they fight to stop it.

At the beginning of the sequel quest Summer's End, just as the adventurer enters the ghost farm, there is a large rumbling noise and the ground shakes. After consulting Summer, she explains it was the Spirit Beast clawing away at the veil between the Spirit Realm and (real) realm of RuneScape.

During the quest, the adventurer must lure the beast into a cave using a familiar, burn its face in order to distract it enough to hack off its chestplate, trap its Dark Energy Core (which was earlier absorbed by the beast) into a hole, and then finally kill it with some grave blessing. It is a very difficult ordeal, but a rewarding one.

After the quest, the beast can be fought again, this time as a level 785 Corporeal Beast. with 100,000 life points and the ability to hit over 4000 with Melee and Magic. It is the only monster that drops Sigils for the Spirit Shield, as well as providing other rare drops such as regen bracelets and full crystal keys.

The Spirit Beast is located in the Spirit Realm. This is a different plane parallel to the Wilderness. It is trying to get to the real world for more souls to acquire and tried to claw through the dimension barrier (The Void) instead of using an existing one, like the Abyss. It can be accessed by a number of glowing or invisible portals scattered across the Wilderness. If players operate Jennica's ring (a reward from Spirit of Summer, and upgraded to use invisible portals in Summer's End) while they are standing in a portal, it will activate and teleport the player to a part of the Spirit Realm (or back to the real world Wilderness if they are already in the Spirit Realm). The portal players will need to reach the Spirit Beast is located in the farm ruins north-east of the Wilderness Volcano. Players can only visit the Spirit Beast here during Spirit of Summer and Summer's End.